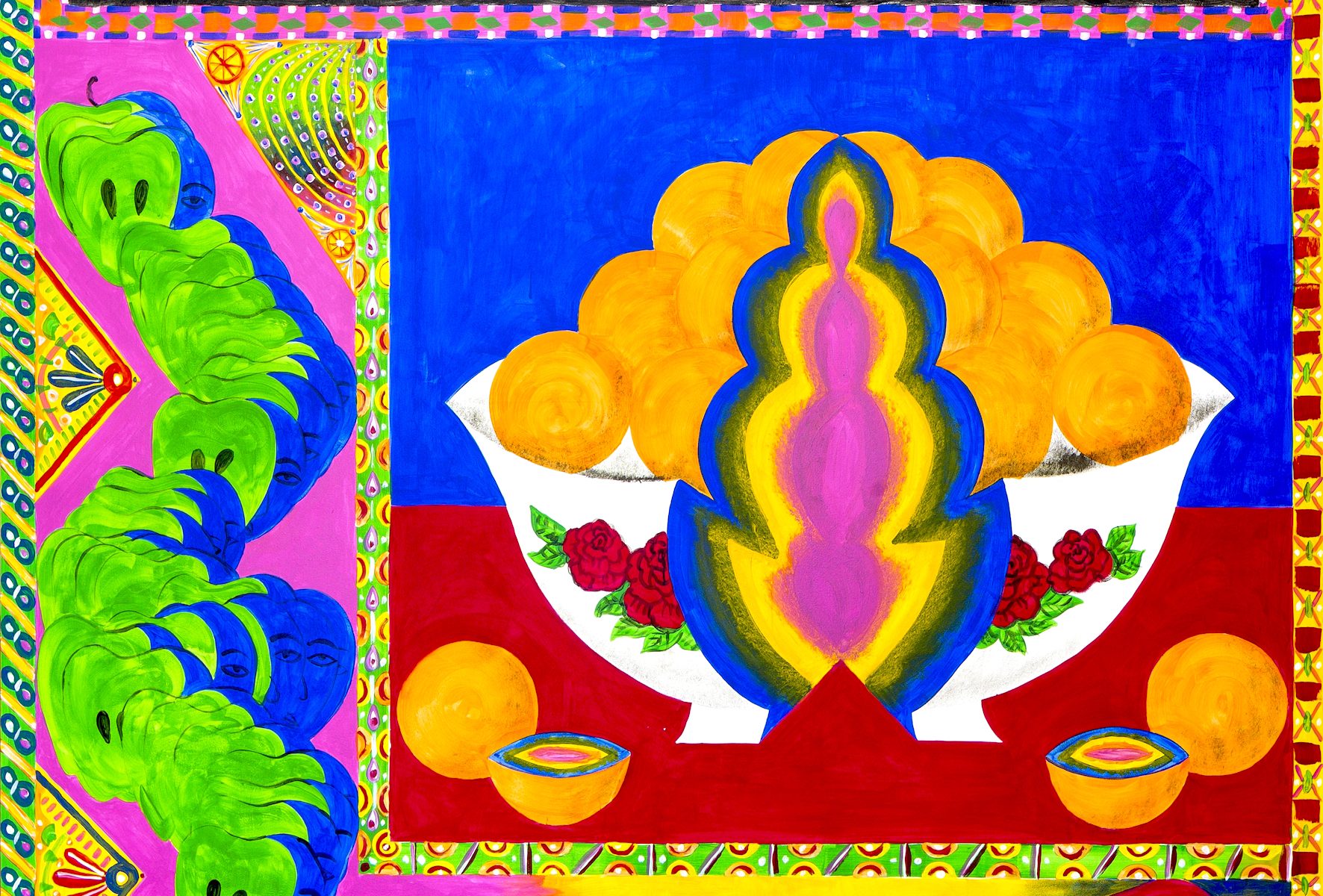 Drawing from Persian miniature painting, South Asian truck ornaments and digital glitch imagery, Iman Raad’s work has immediately impressed me because of its intensity, its explosive mix of colours and the contradictory combination of beauty and fear, pleasure and pain. Looking at his paintings the viewer witnesses a moment of rupture, a frozen moment of reality when something is about to happen.

In this interview this Iranian born Brooklyn based artist guides us through his latest work that has been recently shown at the Sargent’s Daughters Gallery in New York.

Observing your work, you’re using elements of folklore Persian mythology such as typographic details and allusions to Persian miniature. Is this Iranian culture and folklore an important source of inspiration for you?

Yes, It has always been sort of like that. But it’s actually beyond a source of inspiration. It’s a basis of my thinking structure, either subconscious or brought on consciously.

I attempt not to indicate “iconically” to Persian culture in my work, so you could hardly recognize elements of folklore. Iconic indication to “other ” cultures is a Western approach to art because it’s an obvious representation of other cultures and is available to be taken out of its context and is easy to communicate and so to consume.

“But my work constantly refers to Persian culture “indexically”, since this is rooted in my thoughts. I have lived with this culture, I breath it, I learn from it and I construct my language to dialogue with art history through it.”

This is, I believe, the contemporary approach to ethnicity and cultural identity.

You’ve recently had a solo show “Tongue Tied” at the Sargent’s Daughters Gallery in New York. Could you explain a little bit more your latest work for this show.

In the exhibition there was a variety of works that I have made in 2016, all under the umbrella of one single title: ”Tongue Tied’.

“To me paintings represent a moment of disturbance to reality.”

I create this disturbance through wrong perspective, disordering physical rules, image replication inspired by digital glitch on screens as well as representing momentary events as threshold of a crisis. Objects and fruits appear to be self-conscious animate things.

In the ‘Tongue Tied” show there is a series of 9×12 inch egg-tempera paintings that were lying down on their individual narrow shelves. I recently started painting with egg-tempera on panels. The process is slow and tiring which I hate, though I seriously need this sort of meditative time. I enjoy the way egg’s yolk flows on smooth surface of claybord panels, and so the texture that unmixed pigments make. The colors are bright and I like the way it looks like painted tiles.

I also showed a large marker painting on paper that I’ve created earlier. This drawing represent a complex interplay of ornamental tablecloth, wallpaper and carpet interrupted by long rows of overlapping birds move across the painting. It took me a month to finish this 5-foot-by-7-foot drawing.

The Hero of the exhibition, I sometimes call it Don Quixote, is a flat figure kneeling down with a flag in his hand and a self-portrait of me on his chest imitating Barbara Kruger’s work “Your Body is a Battleground”.

The show also includes a site-specific large-scale mural painting on the walls of Sargent’s Daughters Gallery’s office. This was made in four days with two assistants and lasted for the exhibition time.

You’ve done also a lecture performance called “Two-headed Imagomancy” with Shahrzad Changalvaee, another Iranian artist and your wife: What does the title mean and what is this performance about?

Shahrzad and I both come from a graphic design background. We were members of the Dabireh Collective before we left Iran. The Dabireh Collective was founded by Reza Abiding in 2008. It was a collective of graphic designers, type designers and linguists researching with a focus on Persian language, alphabet, calligraphy and typography.
Since we’ve been moving to the US we got offers to talk about our graphic works and we decided to turn our talk to a collaborative lecture-performance in form of storytelling.

“Its form is inspired by Pardeh-khani, a form of storytelling tradition common in coffee-houses in Iran.”

Our narrative comes with stories within stories, some historicals, some personals, some myths or fictions. But all stories deal with language and script, mainly Persian-Arabic script history. Each performance has an exclusive unique backdrop painting, containing illustrations for the story and a significant image referring to the venue that it’s happening in.

“Two-headed” in the title refers to us as the storyteller couple and “imagomancy”, we made it by combination of imago + mancy. “Imago” is the Latin word for “Image” and “-mancy” refers to the divination of a particular kind, like bibliomancy, geomancy or palmomancy. So “Imagomancy” means the divination by means of images.

The poems of Hafiz or Rumi are very present in everyday life in Iran. Is there a poem that guides you through life?

Not really any specific I could remember. Maybe generally as you say it’s present in Iranians everyday-life, it has affected my thoughts subconsciously like almost all Iranians.

Credits:
All works by Iman Raad