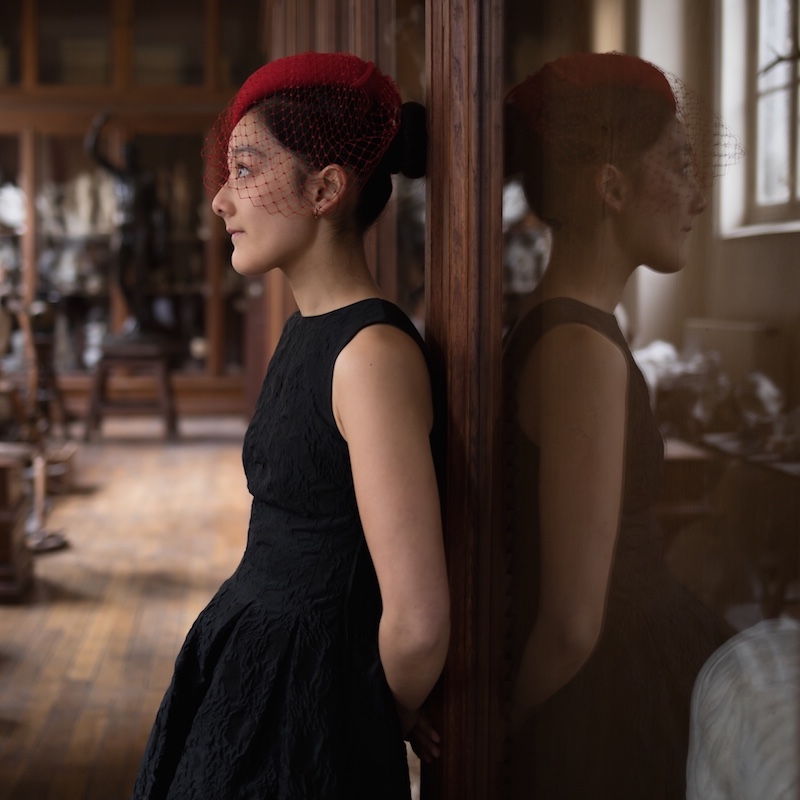 The first time I met Christelle Tea, I was intrigued by this person who looked like a chinese girl from 30s with this pale skin and with this eccentric hat on her head wearing a little black dress. She reminded me of the main character in Marguerite Duras’ s « The Lovers ». It’s this contrast between her extravagant look mixed with this juvenile behavior and naive sincerity, that surprised me.

Shy and discret by nature, I discovered the other side of Christelle during our shooting at the Ecole des Beaux-Arts in Paris when she was posing in front of the camera. This body that seemed so fragile one second ago showed all of a sudden strength and confidence.

Christelle knows how to play with her image. Brought to art by destiny driven by her extraordinary talent, Christelle Tea reveals in her work with virtuosity the truth of an instant with all its details and invites the spectator to look and to look over again at this very specific moment.

Where does your passion for drawing comes from?

I’ve been drawing since I’m a little girl. My parents had a Chinese restaurant and I’ve spent all my afternoons there with my sister. We were so bored. One day I told my mum  and so she gave me a notebook and a pen that she was using to take the clients’ orders. From that moment on I was drawing all the time.

It was not only an occupation but also a way of expressing myself because I was extremely shy. I was a very quiet and discret child.

Until I was six, I didn’t speak french at all even though I was born in France and lived in France all my life.

At home we only spoke Teochew, a Chinese dialect from Guangdong, a province in the south-east of China.

So when I started to go to school I felt like an alien, I didn’t understand any word the teachers and the children were saying.

Drawing helped me to escape, to express myself, to be understood. For me drawing was a means of expression and communication.

So it was from that moment on that you’ve decided to become an artist?

My mother always said if she knew she would have given me a calculator rather than the notebook and the pen; and for my father being an artist was not at all an option to earn your money.

I’ve discovered Da Vinci’s Mona Lisa or Picasso when I was in high school during art classes.

Years after, I was lucky enough to be accepted at the Beaux-Arts de Paris. It’s a real paradise to study art there. You can choose any class you want and experiment in this breathtakingly beautiful location.

So it’s finally destiny that brought me to becoming an artist.

You went to China during your studies for an exchange program with the Academy of Fine Arts in Beijing. Did this experience help you to reconnect with your Chinese origins?

These six months helped me to renew my ties with my Chinese origins and I’ve discovered also the differences between the Chinese and French way of teaching.

While studying in Beijing, I was allowed to study only one technique, no way to choose more than one. However this helped me to have a real expertise. So I’ve decided to learn wood engraving with Master Xu.

And when I had some time off, I was walking around the city with my drawing tools. I felt free like a bird!

I was drawing in the streets, at the market, at the museum, in the hutongs of Beijing.

So you’ve got always a drawing board, a sheet of paper and an ink pen with you. That’s a real mobile studio ! Would you like to have a real artist’s studio to go there and work every day?

During my artist residency  at the Museum Jean-Jacques Henner in Paris, I have had actually a studio for 6 six months but I was never there.

For my work, I need life, I need mouvement.

This life, this mouvement that you mention you capture them on the spot and without doing any sketches before in your portrays. Real life drawings of people at home, at work where you don’t miss any detail. Is it important for you that people are pleased with the outcome of their portray?

No.
I don’t try at all to praise the person that I’m drawing.

What I’m interested in those drawings and portrays drawn on the spot is to capture the world around those people, the immediate reality with all its details that should not be seen but that exist, like the pile of messy cables underneath a Louis XV inlaid marquetry desk or a piano unable to hide the tube of a vacuum cleaner.

It’s in those details that you’re face to face with reality.

« There is nothing as mysterious as a fact clearly described ».

I don’t try at all to neither flatter the person that I draw nor to do a photographic reproduction of her and of the familiar environment around her. She rather becomes an element among others in this composition where every object, every book, every musical instrument, every painting on the wall is illustrated precisely and meticulously.

And when you don’t draw?

When I don’t draw I study opera singing at the conservatoire of the 16th district in Paris with Alexandra Papadijakou.

Music and drawing are very important and complementary to me. Both are a haven of creativity and artistic expression.

By the way it’s the passion for music that gave me the idea to create the huge mural drawings inspired by the opera « The Tales of Hoffmann » of Offenbach or « Faust » of Gounod. I’m also showing myself in those two frescos.

Being a music and art lover, which artists are you fond of?

In art, Hockney, Dürer and Sam Szafran who gave in his work a lot of importance to details and he never went to his own opening shows.

And you, do you like to attend your own opening shows?

Yes.
It’s important to go and see who is interested in my work.
And also in respect for the people who made the effort to come and discover my drawings.
Above all that, it’s a great moment to spend with friends.

What comes to your mind when you think of Iran?

I think of the photographer Ali Mahdavi. I made his portray and I love his work.

Special thanks to Valérie Sonnier et Philippe Comar of the Beaux-Arts de Paris to give us the permission to do the shooting of Christelle Téa at the  gallery of morphology.